Celeste Ng: Everything I Never Told You

Celeste Ng‘s debut novel, Everything I Never Told You, has been making waves! This title won the New York Times Bestseller Book Review Notable Book award for 2014, the Asian American Award for Literature in Adult Fiction, amongst many other accolades. And with good reason – this is a beautifully written story. 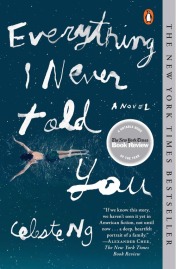 Everything I Never Told You is the story of a mixed race family which takes place in 1970s Ohio. In fact, Celeste Ng herself has Ohio roots and a unique perspective on being one of the only Asian Americans in her area – which fed into the story. This novel begins with a tragedy and unfolds other histories, secrets and difficult decisions that families make along the way.

I had a great interview with Celeste back in June while she was on tour. This interview was featured on my show, Intersections Radio, as part of the November episode on “passport without a country.”

Check out the podcast! Stay tuned for the transcript!