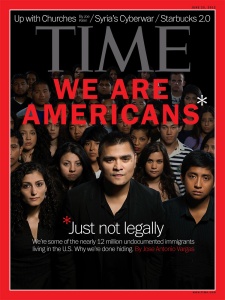 Just in time for election fever.

In the summer of 2011, Pulitzer prize-winning journalist, Jose Antonio Vargas, published an essay chronicling his life as an undocumented immigrant. Since then, he as well as a number of other students, appeared on the cover of Time Magazine, with a follow-up to his story including calling the Immigration and Customs Enforcement office, and receiving no real response.

Since then, he has toured the country, visiting colleges and telling his story: “We’re not coming out. We’re letting you in.” Last week, he stayed in Birmingham, AL, talking with supporters of the strict immigration policy, HB 56, in which, as Vargas says, “Alabama out-Arizona-ed Arizona”.

Two weeks ago, Vargas visiting Lewis & Clark and Reed Colleges here in Portland. I spoke to him by phone about his plans in Birmingham, DefineAmerican, as well as his life story. We featured this interview as part of our November APA Compass “politics special”.

This interview features music by Rupa & the April Fishes, off their new album, Build.

You can also access a transcript of the interview: Transcription_APACompass_JoseAntonioVargas