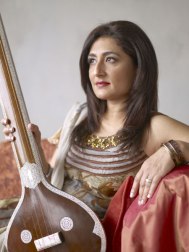 The last time I reunited with two-time Juno award-winning ghazal singer, Kiran Ahluwalia, she was featured on our APA Compass annual music show back in August. Kiran has been on tour for her latest album, Aam Zameen: Common Ground. This album features collaborations with two Tuareg blues groups, Tinariwen and Terakaft.

Kiran joined me live, by phone from Seattle, for a chat on Stage & Studio. She described her experiences collaborating with the Tuareg artists, composing her own music, why ghazals are contemporary (not ancient) music, and the challenges world music artists faced in a time of social unrest in Mali. We featured Raqba, Matadjem, and Mustt Mustt from her Juno-award winning album, Aam Zameen: Common Ground. We also

This interview served as an appetizer for Kiran’s debut performance in Portland, Ore. at the Alberta Rose Theatre! This interview was broadcast back in April on KBOO Community Radio 90.7 FM.

← Baratunde Thurston: How to be Black
Jean Kwok: Girl in Translation →