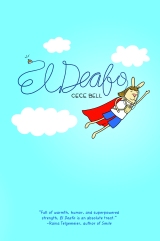 Lately I’ve had the great fortunate of interviewing deaf folks for radio and it has been awesome. Here’s another one to add to the list!

I have to admit, when I heard the title El Deafo, I just had to check out the book. This is a graphic novel memoir of Cece Bell’s elementary school years, in her own witty voice!

Cece Bell lost her hearing at four and half and became intimately acquainted with the Phonic Ear hearing aid – which was more like a box contraption for a little kid. This afforded her some superpowers, including hearing people talking down the street or her teacher in the bathroom! But it also meant being misunderstood and desperately not wanting to be noticed for her disability. Armed with the phonic ear, the “cords of intuition” and the “on/off switch of awesomeness”, she coped with challenges by asking herself, “What would Batman do?”. These are the adventures of El De 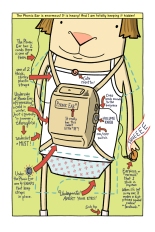 It was fascinating to learn her story, as a radio producer and as a sign language interpreter. She joined me via Skype – and a few recording devices – from her Virginia home.

This interview was featured on KBOO’s literary program, Between the Covers. Check out the podcast!

You can read a transcript of the podcast! CeceBell_transcript

Update: I also captioned some videos from our Skype interview! Check it out!

In this video, Cece talks about her childhood relationship with Sign Language:

In this video, Cece describes her “Phonic Ear” hearing aid and her superpowers:

And in this video, Cece explains why she portrayed the characters as rabbits: 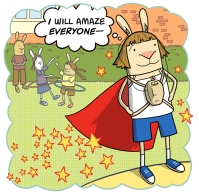