Chaumtoli Huq is a human rights lawyer from New York City and editor of Law at the Margins. Only July 19 of last year, during the month of Ramadan, she and her family attended a Palestinian children’s rally in New York. While her family was using the restroom in a nearby restaurant, NYPD charged her with “blocking the sidewalk”, and twisted her arm behind her back while arresting her.

The story only gets worse from there.

Since then, she sued the city and they settled with $37,500. But for Chaumtoli, it’s not really about the money: she is calling for a meeting between the precinct commanding officer and Muslim American advocacy leaders. Additionally, she wanted Mayor Bill DeBlasio to hold a town hall meeting on police abuse, in this era of #BlackLivesMatter. Unfortunately neither of these issues received any traction from the city. 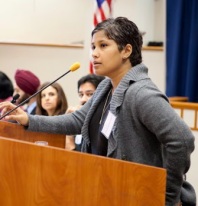 Courtesy of Law at the Margins

She just returned from a sabbatical in Bangladesh in which she worked with garment factory workers’ organizing efforts. She joined me by phone from NYC for KBOO Evening News to talk about the greater issues of racial profiling and police abuse in light of her experiences.

Speaking of which, I anchor the KBOO Evening News every Thursday from 5-6 pm pacific time. You can tune to 90.7 FM locally or stream live.

Check out the podcasts!: