I’ve had the fortune of talking to very cool people about Cuba, including journalist Julia Cooke and inaugural poet Richard Blanco. And I had the opportunity once again thanks to the Artists Repertory Theatre’s Broadway-scale production of Cuba Libre!

Cuba Libre is the story of Alonso, who has a passion for Cuban timba music and wants to bring his music and his band – Tiempo Libre – to the people. This story takes places in present-day Miami and flashes back to Cuba in the early 90s, during the very difficult “Special Period”: Cubans had extremely limited access to food, electricity and other basic needs and many escaped aboard makeshift rafts to brave the waters to make it to Florida. This musical tells the story while weaving Tiempo Libre’s music and spectacular salsa dancing throughout.

For KBOO’s Stage & Studio, I spoke with ART artistic director Dámaso Rodriguez and musical director Jorge Gómez. Damaso directed Cuba Libre and Jorge founded the real-life orquesta, Tiempo Libre. They joined me live, in studio, and we had a delightful conversation celebrating these memories and stories – even the difficult ones – through Cuba Libre. Check out the podcast!

Check out these pictures from the show!
**All photos are courtesy of Artists Repertory Theatre 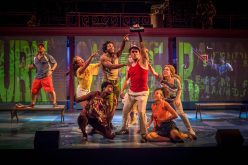 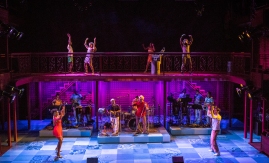