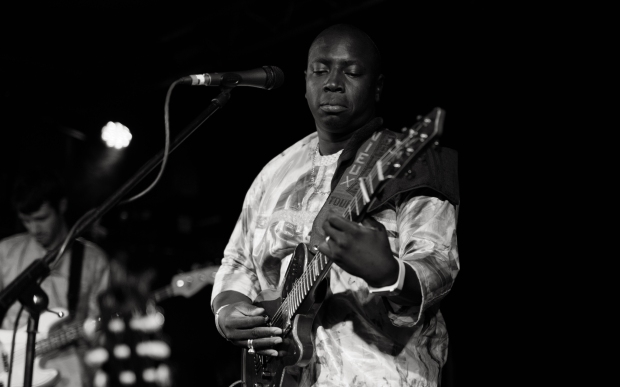 Last month, I had the wonderful opportunity to meet and chat with Malian blues guitarist extraordinaire: Vieux Farka Touré. Mali is home to so many outstanding blues and Tuareg artists and Vieux Farka Touré (yep, son of the infamous guitar virtuoso Ali Farka Touré) is in that spectacular group of musicians.

Both Vieux and his father come from a family of proud Malian soldiers, but his father rebelled and pursue a path in music instead. This path came with struggles, and so Ali never wanted his son to pursue music. But Vieux’s musical prodigy was obvious and of course, he’s the “samba” (second son) in the family – destined for great things! In fact, Vieux Farka Touré’s latest album is called Samba, was released in April,  was recorded live at Woodstock, New York.

He joined me in studio, armed with his guitar, for a fascinating conversation on pursuing music (actually, music chose him), the struggles of reaching a Malian audience and living up to the expectations of being the samba in his family. He also regaled me (well, the station really) with some excellent music, playing two songs: Samba Si Kairi and Bonheur.

This interview was featured for the May 29th, 2016 episode of Intersections Radio on KBOO Community Radio and rebroadcast on XRAY.FM. While we recorded at KBOO on May 4th, we streamed this live on facebook (an Intersections Radio first!). This video and more coming soon! For now, check out the podcast and transcript!

Read a transcript of the interview!
060117 Intersections with Vieux Farka Toure transcript

Stay tuned for the video from the Facebook live stream!