On Common Ground: From Pakistan to Portland

Sometimes I have the opportunity to host badass South Asian artists in studio, and it is always a very good day. It’s one thing we get to take over the airwaves with this, but it’s even better when we take over the KBOO studio in Portland. Today was one such great day.

“On Common Ground” is a collaborative effort between Artists Repertory Theatre in Portland and Theatre Wallay in Islamabad, Pakistan. Theatre Wallay’s original piece explores the lives of contemporary young people in Islamabad, and their relationship to public spaces – schools, squares, mosques, parks, wedding spaces and safe spaces – the way these places reflect the lives of modern Pakistanis and what it means to lose these spaces due to terrorism. Executive Producer Kathleen Mulligan and professional Bharatanatyam dancer Amna Mawaz Khan joined me in studio along with Subashini Ganesan, the Executive Director of New Expressive Works and the artistic director of the Natya Leela Academy here in Portland.

Our conversation began with the diasporatic complexities of Bharatanatyam dance with Suba’s modern interpretations and Amna’s secular styles. But more importantly, the bravery and well, badass-ery, of Amna’s dedicated study (to the point of professionalism) of this form of dance despite the fact that it’s…not exactly supported. We also touched on the “American audience” version of “On Common Ground” as well as the next steps – when Theatre Wallay returns back to Islamabad, translates their work and reimagines it for their home audiences. I look forward to future great things coming from this group!

This interview aired live, in studio at KBOO Community Radio for the June 27th, 2016 episode of Intersections Radio. This was also a “crossover episode” as a substitute for Dmae Roberts’ Stage & Studio, which normally airs at that hour. Check out the podcast!

**Read the transcript of the interview: 062717 Intersections On Common Ground transcript 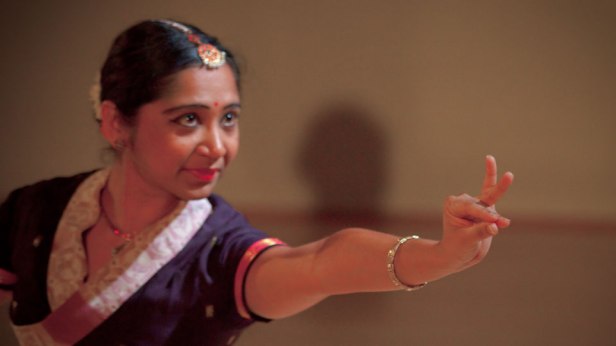