Back to School: Affirmative Action Policies 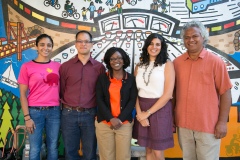 Our September episode of APA Compass featured a panel discussion on Affirmative Action policies as they apply to higher education. This issue was inspired in part, because this week, many universities opened their doors to a new crop of students. And because of a case that is in the supreme court: Fisher versus the University of Texas at Austin. Abigail Fisher, a white student, claims she was denied admissions because of her race, and blames race-conscious decisions in the policy. Our discussion explored how potential changes to the policy affects not only Asian American students, but the greater study body population at public universities. We invited three guests for our roundtable discussion:

Tricia Brand, Associate Dean of Students and Director of Multicultural Affairs at Lewis & Clark College. Tricia holds an Ed.M.in Educational Psychology from Rutgers University and is passionate about diversity, access and excellence in higher education. Previously, she served in leadership roles for the equity and retention programs at the University of Arizona and Rutgers University.

Toeutu Faaleava, Director of the McNair Scholars Program at Portland State University. The program assists first-generation, low-income, or under-represented undergraduates who wish to pursue PhDs. He holds a Ph.D. in Ethnic Studies, and specializes in community mobilization and his research interests are reclaiming indigenous voices, spaces, scholarship and resistance.  He teaches in University Studies and works with Pacific Islander communities here in Portland.

Professor Yoon Pak, Associate Professor in Educational Policy, Organization and Leadership at the University of Illinois at Urbana-Champaign, joined our discussion by phone. She holds a Ph.D. in Educational Leadership & Policy Studies, University of Washington and her research focuses on Democratic Citizenship, Americanization, and acculturation of ethnic minorities and immigrant groups in the U.S., including the higher education and experiences of Asian and Asian American students.

The Supreme Court will take the Fisher v. UT Austin case at the beginning of October of this year.

You can access a transcript of the discussion here: Transcript_APACompass_AffirmativeAction