Five years ago this past November, an Ecuadorian undocumented immigrant named Marcelo Lucero was out walking at night with his friend, Angel Loja, in Patchogue, a quiet town outside of Long Island, NY. Lucero was brutally attacked by a group of teenage boys and while Loja managed to escape, but Lucero died from internal injuries. The group “leader” was put on trial and convicted for his crimes. The boys specifically had intended to attack Latinos, they were out “beaner-hunting”.

This is the premise of Mirta Ojito‘s book, “Hunting Season: Immigration and Murder in an All-American Town.” While this sounds like a thriller, in fact, Mirta Ojito investigates the ancestral history of nearly every single member of the community involved in the story. We see a deeper, complex picture of a community, whose sentiments toward their Latino members were heavily influenced by the politicians’ and media’s unfortunate and powerful language. I found the book equal parts difficult, yet engrossing to read: the profile of a hate crime. 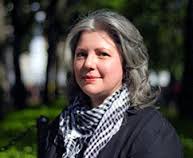 Mirta Ojito, a reporter since 1987, has worked for The Miami Herald and El Nuevo Herald, and, from 1996 to 2002, for The New York Times, where she covered immigration, among other beats, for the Metro Desk. She has received numerous awards, including the American Society of Newspaper Editor’s writing award for best foreign reporting in 1999 for a series of articles about life in Cuba, and a shared Pulitzer for national reporting in 2001 for a New York Times series of articles about race in America.

Ojito is also the author of Finding Mañana: A Memoir of a Cuban Exodus.  Her work has been included in several anthologies includingTo Mend the World: Women Reflect on 9/11, Written into History: Pulitzer Prize Reporting of the Twentieth Century from The New York Times, and How Race is Lived in America.

I spoke with Mirta Ojito by phone from our KBOO studio, about her experiences in the community, her book and the power of language. This interview was featured on KBOO‘s public affairs news magazine, The Radiozine.